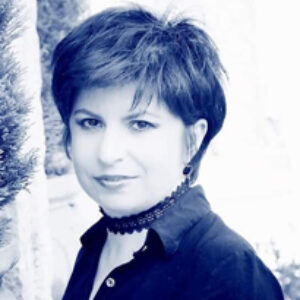 Jani Panolli: “My Experience with Language Schools in Albania Remains Unforgettable Even Now, After 24 Years”

My request for this exclusive interview made Professor Jani Panolli, living in Canada for 20 years now, thank me for pushing him to dig into the photos and the other sources of 24 years ago. As he told me, “you made me take the dust of oblivion off them.” 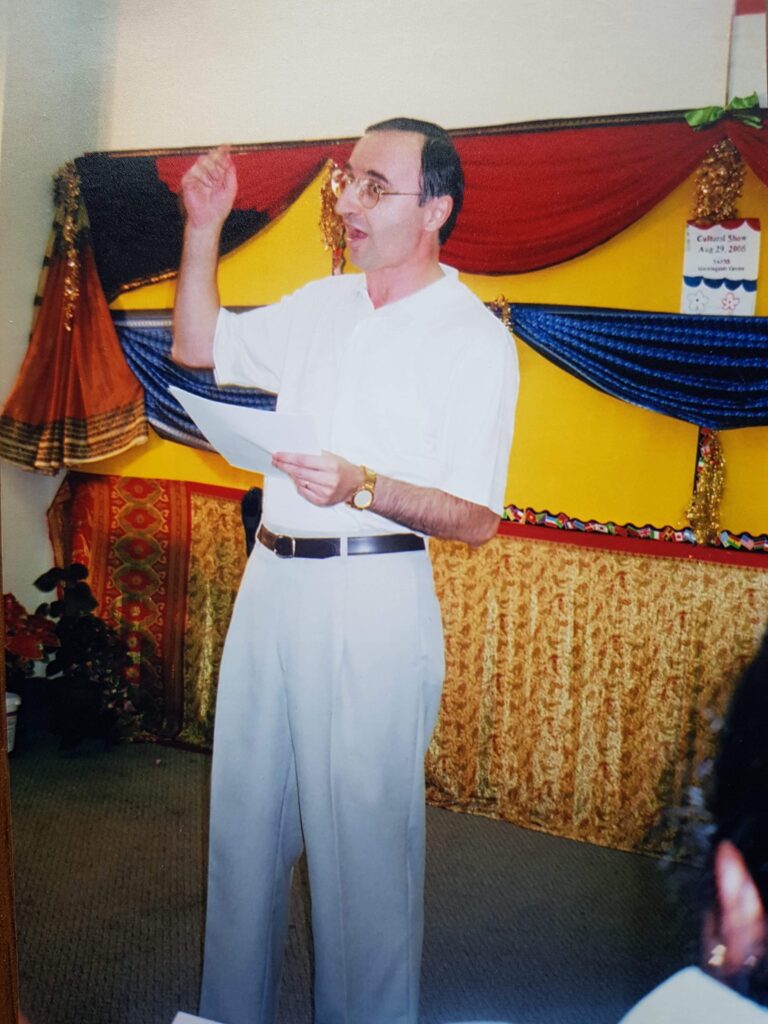 Professor Panolli, distinguished for being a teacher, as dedicated as the mother is for her child, connected with the English Schools in Albania (LSIA) since in its beginnings in the 90s. So, he remembers those times like it was yesterday.
“After the official approval of the LSIA project was granted, the Department of English assigned a group of students lead by Genc Muçaj to help run the school on day to day basis. The opening of the school in Tirana was a success, which was reflected in the positive public response, the high interest, and the increasing demand for enrolment. As a result, not long after the Tirana school, two more schools were opened, in two other cities Durrës and Elbasan respectively,” he stated in this interview.
That is why it was a pleasure for him to make himself available to help with the process of teaching at the Language Schools In Albania in Tirana, when he was invited to do so. 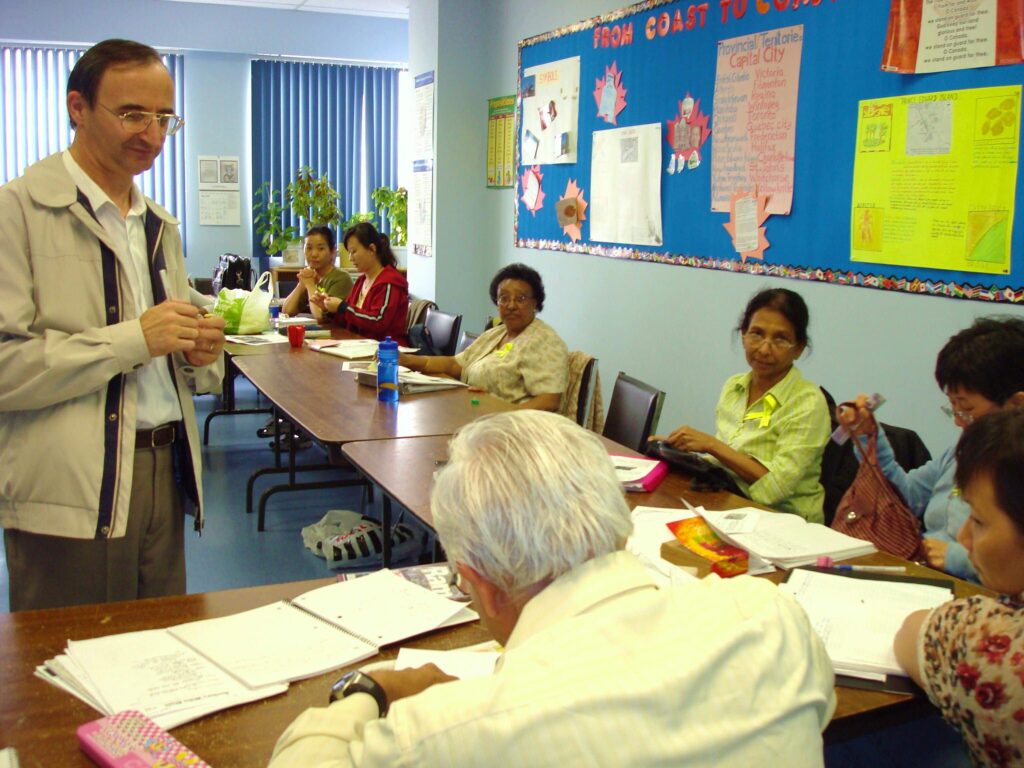 Besides talking about LSIA, Panolli shares some of his thoughts on his new teaching career in Canada where he works as an ESL (i.e English as a Second Language) and LINC (i.e. Language Instructor to Newcomers in Canada) Instructor in the Adult Education Program funded by the Ministry of Immigration of Canada and the Government of Ontario. He also talks about technology integration into language teaching and learning, and about online teaching in the times of pandemic. 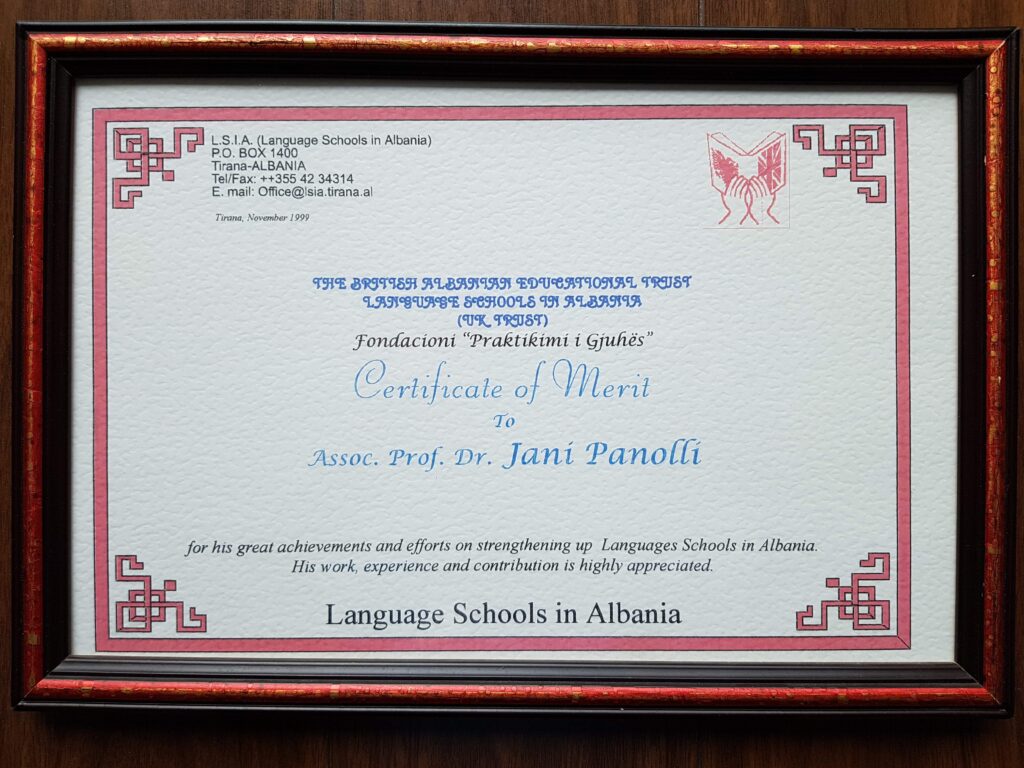 Professor, what do you remember from LSIA’s early beginnings in Tirana and how would you consider its contribution then and now – soon to come even stronger?

When Albania opened up in 1992 and the communist regime collapsed, a lot of foreigners visited the country. I remember in particular two foreign nationals, one from Great Britain and one from Australia, who visited the Department of English of the University of Tirana and asked for help in establishing an English language school in Tirana. The aim was to help the Albanian students to improve their English language skills and prepare them for the new era that Albania was entering. English would soon become a window to the new world and the demand was huge.

A group of professors and students from the University of Tirana got together and founded the Language Schools in Albania, the first private Language Schools in Albania. Professor Hamlet Bezhani, then the Chair of the Department of English of the Faculty of Foreign Languages, became the Chairman of the Board and Genci Muçaj acted as the National School Coordinator who put together a large team of students to launch the schools.

The opening of the school in Tirana was a success, which was reflected in the positive public response, the high interest, and the increasing demand for enrolment. As a result, not long after the Tirana school, two more schools were opened, in Durrës and Elbasan respectively.

That is why it was a pleasure for me to make myself available to help with the process of teaching at the LSIA in Tirana, when invited to do so.
In summer, teaching was done during the day, whereas during the school year, teaching was done two evenings per week following a course schedule of periods of classroom work (in fall and spring) that alternated with periods of school breaks during which the students had to work on their own from home.
My temporary involvement with the LSIA was both in classroom teaching and, as Director of Examination Courses, in designing the method of self-study. (The method of self-study consisted in detailed instructions that taught the students how to study vocabulary, reading, writing, listening and speaking at home, on their own and in pairs, during the months when the courses were not run at school.) That helped the process of learning run smoothly and uninterruptedly throughout the year.

The considerable work load at university and other important engagements and commitments made it impossible for me to continue at LSIA for more than two years or so. But, the students’ high motivation to study and their diligence in the school work on the one hand, and the friendliness, dedication and reliability of the support staff with Genc Muçaj as Managing Director later on the other hand made my experience there so rewarding that it continues to remain unforgettable even now, after 24 years.

Language learning is a major industry in Canada, as both recent newcomers and international students seek to improve their language level. Based on your long experience in Canada, what can you share with us in terms of teaching methodologies, teacher- student communication and other aspects regarding this profession?

Since moving to Canada in 2000, I have worked mainly as an ESL (i.e English as a Second Language) and LINC (i.e. Language Instructor to Newcomers in Canada) Instructor in the Adult Education Program funded by the Ministry of Immigration of Canada and the Government of Ontario.

Teaching English here has been almost as rewarding as teaching in Albania, but often in different ways. For example, from the view point of age psychology there isn’t much difference between teaching adults (from 19 years old and above, with the majority being university graduates) in Canada and teaching university students, journalists, members of parliament, Soros Foundation and UNDP employees in Albania. But, while English is taught as a foreign language in Albania, it is taught as a second language in Canada. Every learner of English in Albania spoke Albanian and belonged to the Albanian culture, whereas in Toronto there are approximately 200 languages spoken and people belong to many different cultures, races and nationalities. In Albania, the same students that started a course would finish it. Whereas in Ontario, enrolment is based on “continuous intake”, i.e. students are allowed to begin attending a course any time during the school year, whenever they settle in Canada, and they are each promoted to the next higher level whenever they are judged (by their instructor) as having reached the required benchmark. Real-life language tasks are usually used to measure the four language skills (i.e. reading, writing, listening and speaking). In Albania there was usually a single textbook used for each course. Whereas in Ontario the English language instructors collect the teaching material from a variety of instructional resources and put it together for each lesson. This is done in accordance with the teaching plan that follows the detailed curriculum guidelines based on the Canadian Language Benchmarks (CLB). The learners want to improve their English language skills for a variety of reasons: to prepare for the job market, for post-secondary education, for the citizenship test and more. To meet their needs, a number of courses are offered, such as 1. English for Everyday (here the four skills – reading, writing, listening and speaking – are taught), 2. Conversation, 3. Pronunciation, 4. Medical Terminology, 5. Business Writing, 6.
Academic English, 7. Academic Writing, 8. TOEFL/IELTS.

From your perspective, what has been the impact of technology integration into language learning and teaching?

At present we are overwhelmed by the number of self-study apps and other internet based sources. Some even claim to teach you English in one month, or even two weeks. That is what I call ‘commercialism’. Yes, there are also good resources out there that modern technology provides us with. And, yes, there is a place for modern technology in language teaching and learning. But it should not be overestimated and should be used wisely. For me, the student-centred learning/teaching that takes place in a classroom setting with lots of direct peer interaction through pair and group work, class presentations and discussions, and with the teacher close at hand to guide and explain the ins and outs of the language problems as needed, is invaluable and irreplaceable. In our Adult Education Program only a maximum of about 20% of the class time per week is allocated to computer-based self-help English language learning. The most widely used software programs in the computer lab are, ELLIS, Tense Buster, Live Action English, Talk Now, My Canada, Explore Canada, English Discoveries, Spelling Fusion, Issues in English, Study Skills, Connected Speech, Business Writing, Pronunciation Power, etc.

During the pandemic, many teachers all over the world taught online. In your view, what makes online teaching successful despite its challenges?

My position is that online language teaching/learning is inferior to classroom teaching/ learning. It could be useful and necessary sometimes when there are no other alternatives left, like for example during the time of school closure due to a pandemic.

Here I only wanted to add that the exclusive use of online learning during the covid-19 school closure is also having a negative impact on the mental and physical health of the students, and their social skills and relations.

Do you keep contacts with your students? If yes, can you mention some of them?

At the time of this interview my fortieth year of teaching has just ended. The first twenty were in Albania (nineteen of which at the University of Tirana, including post-doctoral research work at the University of Texas at Austin in 1992), and the second twenty in Canada; a perfect geographic balance in my teaching career. To this day, I continue to cherish wonderful memories of my work, colleagues, and students in Albania. Some of them went on to become distinguished government officials (one as deputy prime minister, others as government ministers and vice ministers), ambassadors, career diplomats, university lecturers, researchers, entrepreneurs, journalists, etc, in Albania and other countries. If I began to mention names, the list would be very long. Suffice to say that I continue to keep in touch with many of them (now good friends of mine) in Albania, the USA, England, the United Nations Organization, Austria, Italy, Kosovo, and Canada.
From the LSIA I have fond memories of Elton Moçi (Tirana School Coordinator), Anila Mema, Brunilda Hyka, Eneida Bezhani, Bledar Vrapi, Enkelejda Malaj, Dolor Tozaj, and Blerta Muzhaqi from the support staff, and Prof. Fatmir Vrapi (also Acting as Academic Director of LSIA), Pranvera Kosova , Lindita Hasimi and others from the teaching staff. I continue to be in contact with Shpresa (Rira) Qatipi (National Senior Teacher at LSIA and currently professor at the Department of English of the University of Tirana) and Genc Muçaj (former student of mine, School Coordinator at LSIA, successful entrepreneur, career diplomat and ambassador, and active member of the Council of Albanian Ambassadors.)

PrevPreviousMargaret Brown: “I Will Continue to Support LSIA for As Long As I Can”
NextUseful Tips for Teaching OnlineNext

Courses
Follow us on
About
Work with us
Support